Arsenal’s Captain Fabregas finally gets his hands on some silverware! 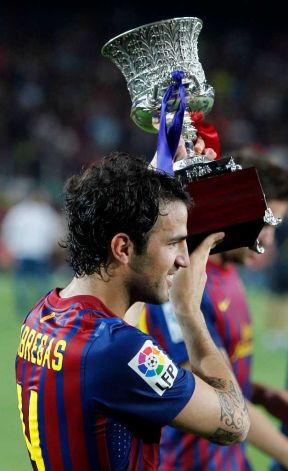 The Cesc Fabregas Timeline to Silverware

2007 : Still nothing, Arsene Wenger didn’t see that one coming.

2010 : Arsene Wenger asks the board “Can we sell this cabinet on e-bay, so that I can buy a few more young boys”

2011 : Cesc Fabregas fails to win anything with Arsenal, the closest being an embarassing loss in the 2011 Carling Cup Final = EPIC FAIL!

Monday 15th August 2011: Wenger admits that Cesc is leaving after years of denial.

Tuesday 16th August 2011 : Barcelona cement the deal, and give Wenger his cash.

14:30 : Cesc waves goodbye to The Arsenal and arrives in Barcelona in his favourite hoody and levis.

22:00 : Cesc is picked to play in the Super Cup final against Real Madrid, well at least watch from the bench!

23:45 : Arsenal’s Captain Cesc Fabregas  finally get his hand on some silverware, after coming off the bench to watch Messi strike a 3-2 winner to sink Real Madrid.

Conclusion : Fabregas managed to achieve what he had failed to do in the last 6 years with “The Arsenal” in only half a day with Barcelona…