Some people seem to be born with a golden spoon in their mouths, others are simply lucky. But you have to buy a ticket in order to win the lottery, and if you don’t play the lottery or  the large progressive online casino jackpot slots, you are simply not going to “get lucky”!

CasinoWinnerOnline.com believes that we have found the luckiest man on the planet! Well at least in Scandinavia anyway! 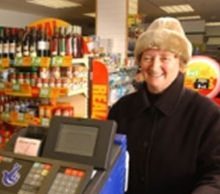 His name is Joahn Ginther, and he is a 63 year old man, living in Sweden. He has won the swedish lottery 4 times over the years, at odds of over 200 million to one!

After a dry spell of another 13 years, he hit his 2nd win of another 1.6 Million Euros. Then another 2 years later he won another 200,000 Euros, and then in June 2010 he won the lottery for the 4th time, winning another 1 million euros.