Thunderstruck 2 is the follow up to the original title of Thunderstruck released by Microgaming back in 2003.

However, Thunderstruck II remains true to the theme of the original game in 2012, with the the player experience being lifted to an entirely new level. 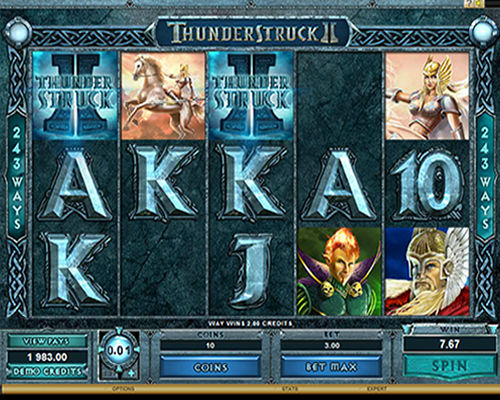 You will experience the high quality enhanced graphics, epic sounds and a hall of extraordinary features, larger than life characters and innovative game play.

This 5 reel Video Slot is based on the popular Norse God of Thunder – Thor and is a continuation of his journey along with other ancient Norse Gods depicted with all their glory in the realm of Asgard.

Thunderstruck II has no payline constraints and instead offers up to 243 ways to win. Symbols need to simply be aligned left to right anywhere on the reels to win. There are Up to 243 winning combinations allowing the player to create more rewarding opportunities

The game features a multitude of bonuses, from a thunderous WildStorm feature triggered randomly in the game whereby Thor’s lightning can turn up to 5 Reels WILD.

Valkyrie, the Sheildman of Valhalla offers a grand 5x multiplier during her 10 Free Spins. 3 bonus symbols will retrigger and award an additional 10 Free Spins.

Loki, the God of Mischief, is unlocked on the 5th trigger and offers 15 Free Spins, with an elusive Wild Magic symbol on the centre reel which randomly transforms any of the other symbols into additional Wilds.

Odin, the Ruler of Asgard, awards 20 Free Spins on the 10th trigger of the Bonus. During his feature, Odin sends out his ravens to randomly fly into symbols turning them to 2x and 3x Wild Multipliers. An impressive 6x Multiplier can be achieved if both birds chose the same symbol.

Enter the God of Thunder’s chamber on the 15th trigger of the Great Hall of Spins. A  thunderous 25 Free Spins awaits with the Rolling Reelstm feature allowing wins with up to a 5x Multiplier.

Players may chose to play any of the features within the Great Hall of Spins once all the chambers have been unlocked.

An exciting new feature and promotional opportunity has been introduced in the form of player Achievements. All wins during the game play are tracked, saved and made visible to players in the paytable as a gold highlight.
Players can strive to complete the entire paytable and operators can use this mechanism as a vehicle for a variety of different promotions. The ultimate prize reserved for achieving every type of win in the game and turning the entire paytable gold.

Similarly the Great Hall of Spins also has a gold status, which is achieve on the 20th trigger of the Free Spins Bonus. The players interface is turned completely gold as an acknowledgement for their continued dedication and loyalty to the game. This is another great vehicle for operator promotions and prizes?