………..The Reel Rush Netent slot is the latest slot from Net Entertainment and is an interesting addition to their product line for 2013. The new Reel Rush NetEnt slot has  5 reels and 5 rows featuring 6 different reel configurations, giving you between 45 and 3125 ways to win. This is first time feature win confiuration from NetEnt offering you an exciting gameplay with a high pay ratio of win amounts. Th Reel Rush Slot also includes Wild substitutions, re-spins and Free Spins with 3125 Ways to Win. If your fifth and final Re-Spin reveals a winning line, you are awarded 8 Free Spins. In the Reel Rush Slot “Free spins” feature there is an interesting twist whereby all of the reel positions are unlocked giving you an astonishing 3,125 ways to win.Free Spins reels are 5-reels and 5-rows. 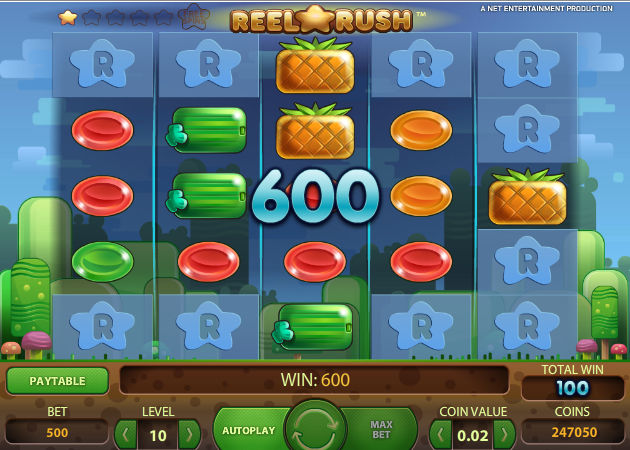 Wild symbols in Reel Rush add even more excitement to the game with quirky  animations. When a Wild symbol completes a winning combination, the star on the symbol spins and shines with golden rays of light.

Re-Spins in Reel Rush create a level of win anticipation unheard of in online video slots, giving you the possibility of winning up to 5 re-spins, each re-spin changing the shape of the reels and ultimately lining the pockets of your trousers!

You can play Reel Rush at any of the casinos below:

Reel Rush is a 5-reel video slot featuring Wild substitutions, re-spins and Free Spins with up to 3125 ways to win.
The game is played with 45 to 3125 ways to win, 1-10 levels (50 coins per level) and different coin values.
There are no bet lines.
The bet level is set using the LEVEL selector.
The coin value is set using the COIN VALUE selector.
COINS displays the number of coins the player has available to wager.
MAX BET starts a game round at the highest bet level and the current coin value.
AUTOPLAY automatically plays the game for the selected number of rounds.
Winning combinations and payouts are made according to the PAYTABLE. Alternatively, click any symbol on the reels during the main game to view a mini paytable for that symbol.
A symbol win in coins is equal to the value shown in the PAYTABLE multiplied by the bet level and the amount of times that symbol appears on each of the reels.
The total win in currency is equal to the total win in coins multiplied by the coin value.
Matching symbols in any position on three or more adjacent reels, starting from leftmost reel to the rightmost reel is a winning combination.
Only the longest matching combination per symbol is paid.
More wins are created when additional instances of the same symbol appear on the same reels that create the longest way to win.
Simultaneous wins for different symbols are added.
All wins pay on ways to win only.
For the total symbol win, multiply the number of matching symbols appearing on one reel by the number of matching symbols on each other reel in the longest winning combination. Multiply the result by the coin win amount for the longest winning symbol combination according to the PAYTABLE. The total win for the spin is the sum of symbol wins for each symbol type.

Wild symbols only appear on reels 2, 3, 4 and 5 in the main game and in Free Spins.
Wild symbols substitute for all symbols.

Reel Rush NETent Slot Re-spins are played at the same bet level and coin value as the spin that activated the first re-spin.
When there are no winning combinations on a re-spin or after the fifth re-spin, re-spins ends and the reels return to the initial configuration.
Re-spin wins are added to any wins from the initial spin.