………..Released on the 24th February 2014, this is a classic slot from the Net Entertainment Swedish games producer.It has a very curious game title, that remind us of some jokes from years back and question whether this could have been the weird logic in choosing this game title for the Wonky Wabbit slot!

Question 1 : What do you call a donkey with 3 legs?

Question 2 : What do you call a  Donkey crossed with a Rabbit with 3 legs?

Anyway, back to the video slot Wonky Wabbits! This is a 5-reel, 15-line video slot takes place in a vegetable garden where hungry rabbits wait for Wilds to appear on the reels. Whenever a Wild appears on the reels, the excitement starts because Wild duplication is about to happen! During Wild duplication, a rabbit will move from the Wild symbol and burrow under the reels, appearing on the symbol where the best possible win will occur. Wild symbols can appear on all reels. Two stacked Wilds can appear on reels 2 and 4 only. This means that a maximum of 14 Wilds can appear on the reels after Wild Duplication occurs. More Wilds mean more hungry rabbits and BIGGER wins!

The max bet is 150 Euros, so this is effectively a high roller slot machine, where you can win over you can win up to 195,000 Euros using this stake in a single game round winning! Get spinning! 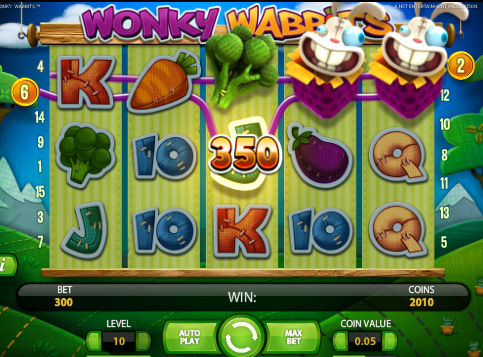 You can play the Wonky Wabbit slot machine from Netent at any of the casinos below: